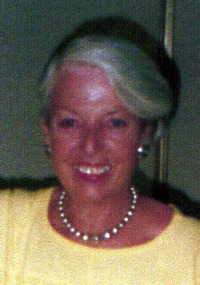 Born on March 7, 1934 in Bunde, Holland, she was the daughter of the late Servatius Hubertus Luyten and Maria Hurbertina Frissen. As a child Mia was confronted with the adversity and unpredictability that was part of daily life during the German occupation of Holland.

On August 10, 1957 she married, Airman Bernard David Gibbons, Jr. (USAF) at St. Servaas Church in Vrijthof Square, Maastricht, Holland. This Catholic Church was built in a gothic style back in the year 1000. It’s the only church in The Netherlands that was built on the grave on a saint. In this case St. Servatius.

Mr. and Mrs. Gibbons resided in Germany and in 1960 they moved to Washington, D.C. She had been employed as a claims examiner and adjuster for APWU (American Postal Workers Union) and New York Life Insurance Company. In 1978 they moved to Santa Fe, New Mexico. Mia was a volunteer and member of the St. Vincent Hospital Womens Auxiliary. She had also worked in the finance department of The Bank of Santa Fe. In 1999, they moved back to Washington, D.C. For the couple’s love of the water and space, they had lived in Talbot and Dorchester Counties and for the past three years made Dorchester their permanent home. No matter where the Gibbons called home, they were always blessed by the many friendships they had made.

Mia had also been a member of the Easton Club East Bridge Group.

Mia was a communicant of St. Mary Star of the Sea Catholic Church, Golden Hill, MD.

An avid gardener, Mia also had an eye for interior design and fashion. She enjoyed taking care of her home and her personal flare is present in every room.

Preceding her in death besides her parents was her son Christopher Gibbons; two sisters Elizabeth Klapdor, Julie L. Aerts; and a brother Pierre J. Luyten.

A Mass of Christian Burial will be held at Noon on Saturday, August 2nd at St. Mary Star of the Sea Catholic Church, Golden Hill, MD. With certain faith, Mia knew someday she would be reunited with her son Christopher, in heaven. In celebration of the reunion of a mother and her son, Mia requested Christopher also be recognized at the Mass. Celebrant of the Mass will be The Rev. William J. Lawler assisted by Deacon Robert Paulocci. Inurnment will be held privately.

To order memorial trees or send flowers to the family in memory of MIA GIBBONS, please visit our flower store.