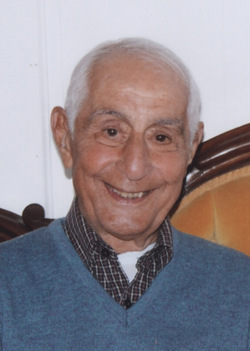 Born on January 12, 1915 in New York, he was the son of the late Pasquel and Margaret Russello.

From Brooklyn, NY he and his wife moved to Mechanicsville, MD where they had resided for thirty three years. There, they were members of the Northern Senior Center and communicants of the Immaculate Conception Church before changing membership to St. Mary, Refuge of Sinners Catholic Church in Cambridge. Just a year ago, they moved to Cambridge to reside with their daughter and son-in-law.

Mr. Russello was a truck driver for most of his working life. His hobbies included crabbing, fishing, hunting, dancing, bike riding, swimming, roller skating and boxing. Mr. Russello loved his family and was very proud of them.

The family will receive friends Friday, July 9th at Curran-Bromwell Funeral Home, P.A., from 3 to 5 p.m. and 7 to 9 p.m. A Mass of Christian Burial will be held at 10:00 a.m. on Saturday morning, July 10th at St. Mary, Refuge of Sinners Catholic Church, Glasgow St. and Hambrooks Blvd., Cambridge. Celebrant of the Mass will be The Rev. William Lawler, Rector. Interment will follow at Greenlawn Cemetery.

In lieu of flowers, memorial offerings may be made to St. Mary, Refuge of Sinners Church, PO Box 218, Cambridge, MD 21613.

To order memorial trees or send flowers to the family in memory of Michael Russello, please visit our flower store.