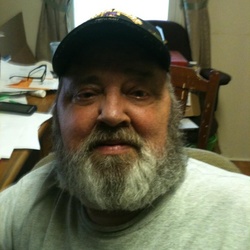 A Celebration of Life will be held Wednesday, November 5, 2014 at 3:00 pm in the Sunrise Chapel at Walters Funeral Home for Michael F. Tobat, Jr., who passed away on October 31, 2014. Pastor Jacob Aranza of Our Savior's Church will officiate the service. A reception will be held following the service in the Reminisce Room at Walters Funeral Home.
Survivors include his wife, Sandra Tobat of Youngsville; one son, Michael Frank Tobat, III (Crystal); three step-daughters, Cynthia LeChevalier-Hill Ann (Raymond), Victoria L. Bonin (Richard), and Christine D. Mendoza (Larry); one sister, Dorothy Harding; three grandchildren, Michelle, Michael IV and Chloe Tobat; 10 step-grandchildren and eight great-grandchildren.
He was preceded in death by his parents, Michael and Ida Tobat.
Raised in Maryland and a resident of Acadiana for the past 35 years, Michael was a proud veteran of the United States Army, and served during the Vietnam Conflict. He was a member of the Purple Heart Association #504, VFW Post #5246 in Federalsburg, MD, and the American Legion Post #69. He earned many medals, including the Purple Heart, Air Medal, Army Commendation Medal, Vietnam Service Medal, and the National Defense Service Medal. Although he was proud of these medals, he would have gladly given them back if he could have prevented the death of one American Soldier, and dedicated his time served to all those who did not return home.
The family requests that visitation be held Wednesday afternoon from 1:00 pm until time of service.
Memorial contributions can be made in Michael's name to the Wounded Warrior Project at www.woundedwarriorproject.org; or to Angel Paws, the New Iberia Animal Adoption Center, at www.iberiahumane.com.

To order memorial trees or send flowers to the family in memory of Michael Tobat, Jr, please visit our flower store.