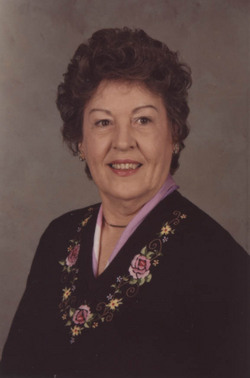 Born on March 5, 1921 in Fishing Creek, Dorchester County, MD, she was the daughter of the late George Willie Hall and Blanche Dean Hall.

Mrs. Elzey was a graduate of Hoopers Island High School, Class of 1938. In her youth, she enjoyed sports and particularly volleyball.

In the early 1960’s the family moved to Austin, TX. She attended the University of Texas and had worked for an attorney during that time. After moving to Norman, Oklahoma she worked at the University of Oklahoma. In the 1960’s she moved back to Maryland where she worked at Aberdeen Proving Grounds. In 1970 the family returned to Cambridge. Mrs. Elzey was employed at the Eastern Shore Hospital Center in the personnel office from where she retired in 1988. While employed there, she was very active in the MCEA, the Maryland Classified Employees Association.

After retirement, she managed the Robin Hood Shop for several years. Mrs. Elzey enjoyed her family and her home. She had been an avid bowler and card player.

Preceding her in death besides her parents was her former husband Howard C. Elzey, Sr; a son Frederick Hall Elzey; her twin sister Ruth J. Creighton; and infant brother and an infant great-grandson Quincy M. Elzey.

Funeral services will be held at 1:00 p.m. on Tuesday, October 6th at Curran-Bromwell Funeral Home, P.A., where the family will receive friends one hour prior to the service. Officiating at the service will be The Rev. David Stewart. Burial will follow at Dorchester Memorial Park.

Pallbearers will be her family members.

Memorial offerings may be made in Mrs. Elzey’s memory to the church or charity of one’s choice.


Memorial Donations Memorial donations can be made to:

To order memorial trees or send flowers to the family in memory of Naomi Elzey, please visit our flower store.