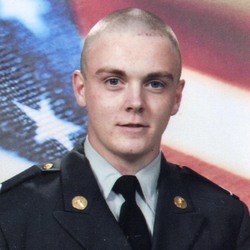 
Nathan W. “Nater” Smullen, 16, of Cambridge passed away suddenly Wednesday, September 11, 2013 as a result of an accidental drowning.
Born in Salisbury March 31, 1997, he was a son of Tammy Lynn Creighton and Charles John Smullen. He currently was attending Cambridge-South Dorchester High School.
Nathan was a very loving young man. He was known by everyone as a helper. Starting in the morning until he went to bed at night he enjoyed helping young and old alike. In the summer he helped the waterman with their boats, he helped neighbors with their grass and would look out for the younger children to ensure they weren’t bullied. As he helped he was observant, a very quick learner with high hopes of all the things he wanted to someday accomplish. His smile and tremendous warm heart will be missed by so many from his untimely passing.
Surviving besides his parents are his paternal grandparents Charles W. Smullen and Lilly Smullen; maternal grandparents Cindy and Hobart Creighton; brothers Johnathan Smullen, Jr. and Joseph Smullen; sister Kelsie Smullen and half sister Miley Winfield; aunts Jaime and Lisa Smullen and a number of friends and extended family.
Preceding him in death is a cousin Matthew M. Smullen.
The family will receive friends Tuesday evening, September 17, 2013 from 6 till 8 p.m. at the Newcomb and Collins Funeral Home, P.A., Cambridge.
Funeral services will be held on Wednesday, September 18, 2013 at the funeral home beginning 1 p.m. with a visitation the hour prior. Officiating will be Pastor Joe Kelly.
Interment will follow at East New Market Cemetery where the Wicomico High School JROTC will conduct military honors.
Serving as pallbearers will be Rankin (Uncle Rankie) Creighton, Gary Hayden, Bryan Pritchett, Bazooka Dave Confair, Darrell Brohawn and Ronnie George Tolley.
In lieu of flowers memorial donations can be made to the Newcomb and Collins Funeral Home, P.A. to assist the family with expenses.
To send online condolences to the family please visit www.newcombcollins.com

To order memorial trees or send flowers to the family in memory of Nathan Smullen, please visit our flower store.