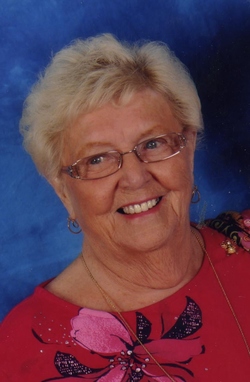 Phyllis Frazier James, 77, of Madison, MD, passed away with her family by her side on Monday, June 2, 2014 at Chesapeake Woods Center, Cambridge.
Born June 4, 1936, she was a daughter of the late Adith Jarrett Frazier and Howard Frazier.
Phyllis attended the local schools and graduated from Cambridge High School with the Class of 1954. She continued her education majoring in nursing, first obtaining LPN from Dover and then obtained her RN from Salisbury State. She worked in senior care with nursing homes in southern Maryland and then in Cambridge. In order to better serve the patients that she cared so much for she became a Licensed Administrator of Nursing. After over 30 years in the field she retired from nursing to pursue her second career as a real estate broker. She, along with her husband Ed, operated Phyllis James and Associates since 1987. Phyllis continued in the business until her health began to fail. She was a very kind person who loved to help people. During her careers she had helped so many in many ways. Her caring way, her smiling face and her grand personality will be missed by family and friends alike.
Phyllis was a life- long and dedicated member of Madison United Methodist Church. She had held various positions including organist, Treasurer and Chairman of the Board. She was a member of Madison Volunteer Fire Company, VFW Post 7460, B.P.O. Elks #1272, and the Dorchester Board of Realtors serving as President.
Surviving her besides her husband Ed, who she married October 26, 1963, are sons Doug Mayhorn of Toddville, Jack James and wife Carrie of Cambridge and John James and wife Bernice of New Jersey; sister Joan Frazier of Cambridge; brother Howard Frazier and wife Gloria of Madison; grandchildren Jason James and wife Amanda, Megan Walling, Morgan Walker, Jessica Hickman and husband Louis, Douglas Mayhorn, Joshua King and wife Patty and Jeremiah King; great-grandchildren Emilia Walker, Prudence Walling, Asher Walling, Christian James, Hayden James and Layla Hickman; along with numerous nieces and nephews.
Preceding her in death besides her parents was her daughter Cindy Walker who passed away June 21, 2010.
The family will receive friends Wednesday, June 4, 2014 from 6 till 8:00 p.m. at the Newcomb and Collins Funeral Home, P.A., Cambridge.
A funeral service will be held Thursday, June 5, 2014 beginning 1:00 p.m. at Madison United Methodist Church, Madison with Rev. Dr. Robert Kirkley officiating.
Interment will follow at Old Trinity Church Cemetery.
Serving as pallbearers will be Jack James, John James, Wade Kenny, Tommy Frazier, Doug Mayhorn, Robin Hall, Danny Frazier and Douglas Mayhorn.
Flowers will be welcomed or memorial donations can be sent in Phyllis’ name to Madison United Methodist Church, Old Madison Road, Madison MD 21648.
To send online condolences to the family, please visit www.newcombcollins.com

To order memorial trees or send flowers to the family in memory of Phyllis James, please visit our flower store.