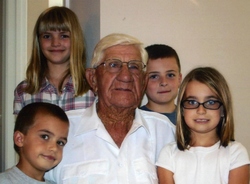 
Ralph Vignuelle Mills, age 89, of Wingate, Maryland went to be with the Lord on Wednesday, March 27, 2013 as a result of a house fire where he lived alone.
Mr. Mills became a dedicated Christian in the late 1970s and was a member of the Souls Harbor Church of God. Recently he had been attending the Nazarene Church in Cambridge.
Born in Crocheron, Maryland on August 27, 1923, Mr. Mills lived his whole life in Crocheron and Wingate. He attended grade school in Crocheron, Maryland. At the age of ten, he started working on the water with his grandfather, Charles Mills, and by the age of thirteen, he was working on the water by himself. He worked at various jobs as a young adult including Phillips Packing Company in Cambridge and for Dorchester County. Mr. Mills worked many summers with his brother, Maurice, in the soft crab business. He loved working on the water and especially enjoyed tonging for oysters at which he excelled. He married Julia Dean on May 27, 1944.
Although Mr. Mills did not have much formal education, he was resourceful and well-educated in the school of life. In his early adult life, Mr. Mills was an excellent duck hunter. He also loved to go to the neighborhood stores and play dominoes and cards with the other men in the community. He was active in the Lakes and Straits Fire Company from the 1950s to the 1970s serving as President and Fire Chief and an ambulance driver. In his later years, he often took fishing parties out of Crocheron and Wingate harbors. In addition, Mr. Mills worked several years for the Curran Funeral Home in Cambridge.
Mr. Mills was a likeable person and did not know a stranger. He could talk with anyone and if you sat next to him for very long, he would engage you in conversation. He was great for telling stories of experiences he had on the water or of growing up in his locale. He enjoyed going down to the “dock” and talking with anyone else who happened to be down there. Always an animal lover, Mr. Mills became especially fond of cats. He “inherited” two cats: Polly from his brother and sister-in- law, and Bubba from his grandson. After Julia, his wife, passed in 2007, it became his responsibility to care for these cats. While he tolerated Polly, he adored Bubba and would cater to Bubba’s palate in order to please his appetite. In addition to Polly and Bubba, he also regularly fed neighborhood cats. The numerous bird houses in his yard was also a sign of his fondness for birds, especially martins.
His passing has been a great shock to his family and community and he will be greatly missed by his family and many friends.
Mr. Mills was preceded in death by his parents, Elmer K. and Lavelle Pritchett Mills, by his brothers, Maurice and Billy Mills, and by his sisters, Hilda Keene and Aleta Leonard. He was also preceded in death by his wife of 63 years, Julia Etta Dean Mills. Mr. Mills is survived by his son and daughter-in-law, Ralph Anthony (Tony) and Donna Hastings Mills of Georgetown, Delaware. He is also survived by brothers Donald and wife Phyllis of Bishops Head and Bobby of East New Market; granddaughter and husband, Maxine and Kendall Matthews of Federalsburg, Maryland; a grandson and wife, Ralph Anthony Mills II and Diane of Greencastle, Pennsylvania; four great-grandchildren: Grace Elizabeth and Samuel Thomas Matthews of Federalsburg, and Julia Kathleen and Carter Anthony Mills of Greencastle; sister in law Priscilla Andrews of Cambridge; nieces Lynne Mills of Cambridge , Sherry Bradley and husband Roland of Secretary and Melanie Gore and husband Jerry of Florida; nephews Dan Mills and Mike Leonard of Cambridge and David Mills of Salisbury and a cousin Annabelle Todd.
A visitation will be held Wednesday evening, April 3, 2013 from 6 till 8 p.m. at the Newcomb and Collins Funeral Home, P.A., Cambridge.
Funeral services will be held Thursday, April 4, 2013 beginning 1 p.m. at the funeral home. Friends will also be received the hour prior. Officiating the service will be Pastor Stacey Johnson and the Rev’s Richard and Sharon Prahl.
Interment will follow at Dorchester Memorial Park, Cambridge.
Serving as pallbearers will be William (Snooks) Windsor, O’Neal Windsor, Kendall Matthews, Anthony Mills, Harold Robinson and Dwight Hastings.
In lieu of flowers donations in memory of Vignuelle can be made to the Lakes and Straits Volunteer Fire Dept., 2103 Farm Creek Road, Wingate, Maryland 2167

To order memorial trees or send flowers to the family in memory of Ralph Mills, please visit our flower store.