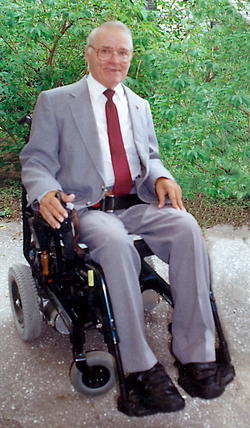 Born on November 11, 1924 in Volga, West Virginia, he was the son of the late Hetzel W. Lambert and Edna Emma Steele.

On September 12, 1953 he married the former Hazel Virginia West.

Mr. Lambert was a graduate from Philippi High School, Class of 1942. He was employed by W.R. Grace Research Center, Columbia, MD for 32 years, retiring as a Senior Research Analyst in 1974.

Surviving is his wife Hazel Lambert of Oxford, MD; a daughter Sue Schmitt and her husband Rick of Oxford, MD; a son Donald of Baltimore; six grandchildren Kristin, Kimberly Richard, and Tyler Schmitt, Cristel Judware and Rachael Lambert; two great-grandchildren Cody Judware and Camden Baldwin; his youngest brother Warne Lambert and his wife Judy of Alabama; a sister Martha Lee Crandell of Virginia; and many nieces and nephews. Preceding him in death are brother’s Clarence, Thurman, and his twin brother Roy.

Ray and Hazel moved to Oxford in 1997, where Ray loved travelling around town in his power wheelchair whenever weather permitted. He also loved being a clown in the Oxford Day parades. Despite his disabilities he was always active in his community. While living in Baltimore County he served many times as PTA President and President of the School Board Nominating Committee he later received a Life Time Membership to the Maryland State PTA. He belonged to the Brotherhood of St. Andrew, taught Sunday school, sang in choirs and barbershop choruses, he coached girls softball, and was involved with Cub Scouts and Camp Fire Girls. After serving on the Grand Jury he became President of the Grand Juror’s Association.

Being one of “Jerry’s kids” he volunteered at the Labor Day Telethons for many years and was interviewed on TV frequently. Just before his death he received a letter from Jerry Lewis as the kid that was older than Jerry.

Graveside memorial service will be held at 1:00 p.m. on Monday, April 26, 2010
at Meadowridge Memorial Park in Elkridge, MD.

To order memorial trees or send flowers to the family in memory of Ray Lambert, please visit our flower store.
Send a Sympathy Card