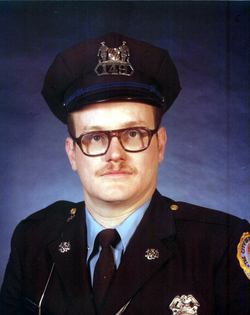 Born on January 23, 1951 in Baltimore, MD he was the son of Cecelia Jesse Wise Gutermuth of Berkeley Springs, W. VA and the late Edward E. Gutermuth.

Bob graduated from Edgewood High School, Class of 1969 and was a graduate Chesapeake College.

In 1973 he became employed by the City of Cambridge as a law enforcement officer.

Bob was a communicant of St. Mary, Refuge of Sinners Catholic Church, Cambridge.

In 1975 Bob became an honorary member of Rescue Fire Company of Cambridge, proactive member in 1976 and exempt member in 1978. In 1975 he was a founding member and life-time member of the Fraternal Order of Police.

Bob retired from the Cambridge Police Department in 1999 as patrolman first class.

Bob’s hobby soon to turn into his passion was his involvement with Retriever Field Trials. He completed the retriever competitions and hunt tests in 1987 and continued field trials up to the time of his death. Bob judged and competed throughout the United States mostly on the East Coast. He held three successful Chesapeake Bay Retriever Field Trials reaching qualified all age status, all age points and completed master hunter titles. He occasionally trained Black Labradors.

Bob volunteered with the Waterfowl Festival in Easton and in the year 2000 was inducted into the Field Trial Gunners Guild.

Preceding him in death was his son Robert E. Gutermuth and father-in-law William K. Lewis, Jr.

Funeral services will be held at 2 p.m. on Thursday, September 1st at Curran-Bromwell Funeral Home, P.A., where the family will receive friends two hours prior to the service. Officiating at the service will be The Rev. William J. Lawler, Rector of St. Mary, Refuge of Sinners Church and Pastor George Wheatley, cousin of the decedent’s wife’s family and Pastor of Cambridge Christian Fellowship Jubilee Church. Burial will follow at Our Lady of Good Counsel Catholic Cemetery, Secretary, MD.

Honor Guard and Pallbearers will be provided by the members of the Cambridge Police Department.

In lieu of flowers, memorial offerings may be made in Bob’s memory to The Retriever Hall of Fame, 505 Hwy 57, Grand Junction, TN 38039.

To order memorial trees or send flowers to the family in memory of Robert Gutermuth, please visit our flower store.
Send a Sympathy Card