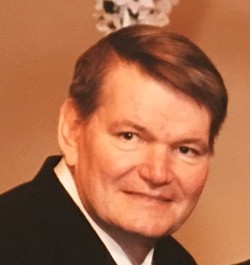 Cambridge Md. — Robert Henry McWilliams Sr., age 64, was called home Thursday afternoon, September 22, 2016 at the Easton Hospital where he was surrounded by his beloved family, friends and Pastor.

Robert’s life is celebrated by his loving wife Charlene Travers McWilliams through their inseparable bond of 42 years of marriage, his son Robert Henry McWilliams Jr, and his daughter in-law Christine Anne McWilliams, grandchildren Robert Ethan McWilliams, Elise Christine McWilliams, Evelyn Grace McWilliams and an expected grandson Elliott to make his arrival in November, all of Easton. Brother John Benjamin McWilliams, Jr. and his wife Gloria of Woolford and two sisters, Mary Ann Valenstein and her husband John of Cambridge and Joan Hope Marchewka and her husband Bruce of Felton, DE.

Born and raised in Cambridge MD, the son of the late John Benjamin McWilliams, Sr. and Betty Lithicum McWilliams. He was a lifelong resident of Cambridge and an active member of the community. Robert was called to give back and focused on philanthropic efforts holding positions and participating in: Cambridge Lodge #66, Boumi Shrine, Chester River Shrine Club, Magic Carpets, Maryland Knight Masons, Maryland Rosicrucian, Denton Commandery #10, 32 degree Scottish Rite, Member of the Supreme Council and Member of the Shrine Order of the Purple Cross. He served as the Grand Governor Maryland York Rite College, Secretary of Hayward Chapter #24, Secretary of Zabud Council #9, Past Grand Master of the Grand Council of Maryland, Past Officer of the Grand Chapter of Maryland, Past Ambassador of General Grand Council and a volunteer for the Cambridge Rescue Fire Department.

Robert’s community celebrated his career as an Investment advisor who was always willing to help or provide words of encouragement for his fellow community members. He was always engaged with friends and strangers looking to lend a helping hand. Whether touring around Cambridge with his lovely wife Charlene, or visiting friends and family Bob was always on the move spreading joy and fellowship wherever he went.

Robert McWilliams through his work with the Shriners Hospital aided several children in receiving life altering medical attention. He was dedicated to his grandchildren and looked forward to every weekend for them to spend time together. Rob Jr, knew his father was a beacon in his life, providing support, love and unwavering dedication to him throughout the years. Bob was loved and cherished by his friends and family, and while his parting is a sweet sorrow, the joy of his memory will live on in each and every one of our hearts.

A viewing and visitation with family will be held Thursday evening, September 29, 2016 at the Talbot Bible Church, 9114 Chapel Road, Easton, MD from 5-7 p.m.

All donations in memory of Robert H. McWilliams will be matched by Rob Jr and Chrissy McWilliams; we sincerely thank you for any and all donations made in Robert McWilliams memory.

To order memorial trees or send flowers to the family in memory of Robert McWilliams, Sr, please visit our flower store.