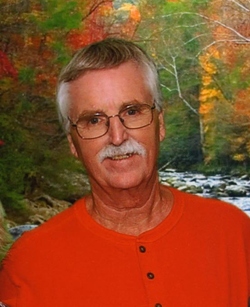 
Ronald G. “Randy” Pohl, 68, of Cambridge passed away peacefully on Wednesday evening, January 8, 2014 at his home with his family by his side.
Born April 28, 1945 he was a son of the late Mace Wolf and Louise Burton.
Randy grew up in Cambridge and attended the local schools. He was a member of the 1963 graduating class of Cambridge High School.
Randy and his brother Frank formed Pohl Brothers Scrap Iron and Metal Recyclers in 1971, continuing the business taught to them by their father Mace. Randy operated the business till his retirement in 2007. He also enjoyed doing it part time along with working at Wal-Mart to help him stay busy.
On August 9, 1968 he married the former Gloria Elizabeth Mills. They were blessed with a daughter Teresa, and two grandchildren, Trevor and Karlie.
Randy was always a hard working man. He would journey all over the county picking up salvageable iron and metals. He was known by all with his easy going manner and warm smile. His laugh was contagious and when he started, others would have to follow along.
Family, traveling and all aspects of life Randy enjoyed. He loved vacationing with all the family included. Nothing brought him more joy than being “Pop Pop “to his two grandchildren.
Randy was a member of the Wesleyan Church in Cambridge and had previously served on the board.
Surviving is his wife Gloria of 45 years; daughter Teresa Hughes and husband Joseph; brothers Morris Pohl and wife Joyce, Frank Pohl and wife Elaine; sister Kendra Nichols; sister in law Mary Pohl; grandchildren Trevor Joseph Hughes and Karlie Elizabeth Hughes; several nieces and nephews.
Preceding him in death besides his parents is a brother William Pohl.
A funeral service will be held Monday, January 13, 2014 beginning 1 p.m. at the Cambridge Wesleyan Church with Pastor Jack Diehl officiating. The family will receive friends the hour prior to the service.
Burial will follow at Dorchester Memorial Park, Cambridge.
Serving as pallbearers will be Joseph Hughes, Trevor Hughes, Frank Pohl, Wendell Meekins, Gene Harper and Kemp Brooks.
Honorary pallbearers will be Leonard Meyer and Reese Hurley.
Arrangements entrusted to Newcomb and Collins Funeral Home P.A., Cambridge.
To send online condolences to the family please visit www.newcombcollins.com

To order memorial trees or send flowers to the family in memory of Ronald Pohl, please visit our flower store.