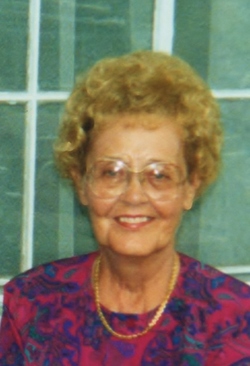 Rose M. Hubbard, 89, of Cambridge, Maryland passed away Saturday morning, January 16, 2016 at Chesapeake Woods Center, Cambridge.
Born on May 3, 1926 in Cambridge, she was the daughter of the late Cora Edith Lewis and James Elmer Cantwell.
Rose attended the local schools and graduated from Cambridge High School with the class of 1943.
On November 27, 1946 she married William A. Hubbard and together raised two children.
She was a member of Open Bible Church and faithfully attended regularly until her health declined. She worked as a bookkeeper at Nathan's Furniture Store before retiring after many years.
Rose was known by many for being a non-selfish person. If anyone was in need of a caregiver she would be the first to be called. She was a very gentle and kind spirited woman who loved her children, grandchildren and great grandchildren. She will be missed by all.
She is survived by her daughter Janet Emerson and her husband Toby; son Jay Hubbard and his wife Christie; grandchildren Ben, Kelly and Dylan Emerson, Justin, Bryan and Christopher Hubbard, Gene Parks III, Jessica Hubbard and Devon Greene; great grandchildren Natalee, Abbygale and Jorja Rose Emerson; cousin Robert Lloyd; special friends Gloria Morgan and Mamie Short.
Preceding her in death besides her parents was her husband William A. Hubbard who died on May 2, 2005 and her best friend and side-kick Marjorie Burton.
A visitation will be held on Thursday evening, January 21, 2016 at Newcomb and Collins Funeral Home, P.A., 308 High St., Cambridge from 6 to 8 p.m.
Funeral services will be held on Friday, January 22, 2016 beginning 1 p.m. at Open Bible Church, 1619 Race St., Cambridge with Rev. Dave Wooten, Jr. and Rev. DJ Wooten officiating. Interment will follow at Dorchester Memorial Park. Family will receive friends an hour prior to the service.
Pallbearers will be Dylan Emerson, Toby Emerson, Bryan Hubbard, Christopher Hubbard, Gene Parks, III and Justin Hubbard.
To share online condolences with the family, please visit www.newcombcollins.com

To order memorial trees or send flowers to the family in memory of Rose Hubbard, please visit our flower store.
Send a Sympathy Card