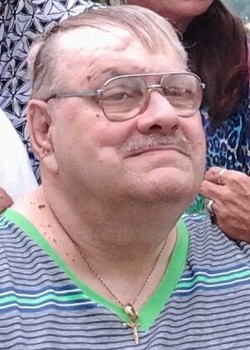 Roy F. "Bo" Myerly, Jr., 74, of Crisfield, Maryland passed away Friday, July 14, 2017 at PRMC in Salisbury with his family by his side.
Born on July 1, 1943 in Baltimore, Maryland, he was the son of the late Bertha Oldhouse and Roy F. Myerly, Sr.
On September 11, 1967 Roy married the former Barbara Shorter and together made their home in Cambridge. Barbara died on January 16, 2008.
Roy attended the Mariners Methodist Church in Crisfield. He worked at Walmart as a greeter before his health forced him to retirement.
He had a love for cats and dogs especially Poodles. Going to restaurants to eat was one of Roy's favorite things to do along with playing bingo. In his younger years you could find him on the dance floor showing off his dance moves. Spending time with his family was most important to Roy and he will be truly missed by all who knew and loved him.
Surviving him are daughters Melody LaChappelle of Cambridge, Faith Cannon who was also his caregiver of Crisfield and Angel Osborne of Salisbury; granddaughter Shelly Tinsley; great grandchildren Michael LaChappelle, Dylan & Dustin Tinsley, Robert Lee Daniels, III, Paul Joseph Osborne, Jr. and Patrick Jayden Osborne; sister, Connie Greely.
Preceding him in death besides his parents and wife was a granddaughter Stephanie Daniels; brothers Clarence and George Myerly.
Services will be private.
Arrangements entrusted to Newcomb and Collins Funeral Home, P.A., Cambridge.
To share online condolences, please visit www.newcombcollins.com
Born: July 1, 1943 Death: July 14, 2017 Share your thoughts and memories in the guestbook.

To order memorial trees or send flowers to the family in memory of Roy Myerly, Jr, please visit our flower store.