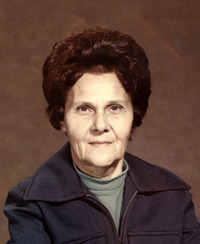 Born on October 16, 1914 in Fishing Creek, MD, she was the daughter of the late Bertha Horseman Travers and Alexander Travers.

Mrs. Travers was the wife of the late Thomas Travers, whom she married in 1933.

Mrs. Travers was a crab picker, having worked at various seafood companies on Hoopers Island.

Mrs. Travers was a member of the Riverside Wesleyan Church, Hoopers Island.

Funeral services will be held Wednesday, February 25th at 11:00 a.m. at Curran-Bromwell Funeral Home, P.A., where the family will receive friends one hour prior to the service. Officiating at the service will be The. Rev. Richard K. Prahl, relative of the deceased, assisted by The Rev. Larry Wroten, grandson of the deceased. Burial will follow at Dorchester Memorial Park.

Memorial offerings may be made in Mrs. Travers memory to the Church of the Nazarene, 97 Sandy Hill Rd., Cambridge, MD 21613.


To order memorial trees or send flowers to the family in memory of RUBY TRAVERS, please visit our flower store.