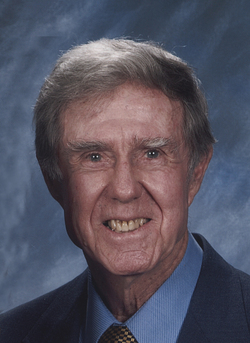 Born on May 20, 1930 at Hoopers Island, Maryland, he was the son of the late Lloyd James Aaron and Ethel Bailey. Rudy moved to Cambridge with his mother and brother at the age of eleven, graduated from Cambridge High School – Class of 1947, got a job as a bagger at the age of seventeen at the Great Atlantic and Pacific Tea Company (A&P) on Race Street in Cambridge where he worked for thirty years, exemplifying the same qualities and values that have characterized all of his life’s work being loyalty, dedication and honesty.

On December 31, 1950 he married the former Patricia Lee “Pat” Collins.

Rudy’s life has been one of dedication to family, community and nation, a lifetime of public service beginning with his enlistment in the United States Navy in 1951 during the Korean War at the age of twenty-one. First Class Petty Officer Aaron served his nation with honor and distinction for sixteen years on active and reserve duty, being recalled to active status in 1961 to fly reconnaissance missions over Cuba during the Cuban Missile Crisis.

While raising a family, working full time at the A&P and part time with the Port of Cambridge, his love of community caused him to give what time he could to its affairs such as serving as an Elections Judge and Supervisor with the Dorchester County Board of Elections for nearly forty years, being appointed by five different Governor’s. Rudy remained active in the American Legion Post #91, the Cambridge Jaycees, Dorchester County Liquor Board, and the Veterans Recognition Committee.

Rudy was awarded Resolutions of Gratitude and Respect from the Dorchester County Board of License Commissioners on September 15, 2008.

Rudy had also been a waterman and avid hunter.

Rudy was well known for his endearing storytelling, great smile, kindness and laughter. No one was a stranger to Rudy.

The family will receive friends from 6 to 8 p.m. Friday evening, Sept. 16th at Curran-Bromwell Funeral Home, P.A., Cambridge. Funeral services will be held at 1:00 p.m. on Saturday, Sept. 17th at St. Paul’s United Methodist Church, 205 Maryland Avenue, Cambridge, where the family will receive friends one hour prior to the service. Officiating at the service will be The Rev. Delmer Willey and The Rev. Fred Bahr. Military Honors and interment will follow at Dorchester Memorial Park

Expressions of sympathy may be made by either sending flowers or making memorial offerings to either the Veterans Recognition Committee, P.O. Box 143, Cambridge, MD or the Alzheimers Assoc., at 909 Progress Circle, Suite 400, Salisbury, MD 21804. *** please note that the Progress Circle address is the current/corrected address due to their office recently moving. ***

To order memorial trees or send flowers to the family in memory of Rudy Aaron, please visit our flower store.