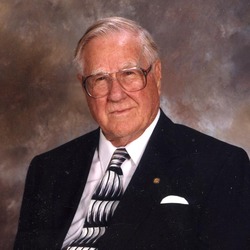 Rufus M. “Bobby” Todd, 89, of Fishing Creek, Maryland passed away peacefully Sunday, February 16, 2014, at William Hill Health Care Center, Easton. Several dear friends were by his side.
Born September 30, 1924, in Robbins, Maryland, he was the son of the late Cora Elizabeth Robbins and Gillis Reese Todd. He attended elementary school at Gootees’ Neck and graduated from Cambridge High School. After serving during World War II in the Army Air Corps, he attended and received his degree in Business Education from the University of Maryland, College Park.
Rufus married the former Loraine Hall of Hoopers Island in 1948. They each were teachers, but, they also operated the Russell Hall Seafood Company. After teaching during the day, he and Loraine, along with his mother-in-law Pauline, could be seen in the crab truck on its way to Baltimore to deliver the local crab meat from the days catch to the various restaurants and seafood markets. The next day the process would start over.
After 30 years of teaching, Rufus retired in 1979. Many of his students fondly remember “Rock” as a towering, no nonsense teacher with his trade mark bow tie. He continued in the seafood business until 1996.
During his retirement, Rufus enjoyed traveling and had explored most of this beautiful land.
Rufus, along with his wife Loraine, was a superlative example of someone willing to give away what they had so others might benefit. He helped start and build the current Hoopers Island Volunteer Fire Department building and donated to numerous fire departments in the area. During his later life, he became well- known as a public spirited philanthropist. He provided funding to transform the performing arts center at Chesapeake College to a state- of- the- art facility that bears his name, donated generously to the Dorchester General Hospital Foundation and the Radiology and Oncology Department of John Hopkins Hospital in Baltimore. The Todds also helped make the Choptank River Lighthouse replica a reality. He also organized and funded the Sandy Island Cemetery Association, Inc. His contributions will help and be enjoyed by many for years to come.
Preceding him in death besides his parents, is his wife of 65 years, Loraine, who passed away February 3, 2014.
Surviving is his sister, Jeanette F. Todd of Robbins; nephew Vance L. Todd and wife Debbie of Cambridge; niece Gail Benjamin and husband Rod of Church Creek; numerous cousins and special friends.
A viewing will be held Thursday , February 20, 2014, at the Newcomb and Collins Funeral Home, P.A., 308 High Street, Cambridge from 6 till 8 p.m.
Funeral service will be held Friday, February 21, 2014, beginning 12 noon at Grace United Methodist Church, 501 Race Street, Cambridge. A visitation will also be held from 11:30 a.m. till start of service. Officiating the service will be Pastor Christina Blake.
Interment will follow at Dorchester Memorial Park, Cambridge.
Serving as pallbearers will be Larry "Boo" Powley, Joseph Ruark, Harry Phillips, Mark Phillips, Vance Gregory Hobbs, Jay Newcomb, Robin Hall and Brian Hall.
Honorary pallbearers will be Ray Melvin, Raymond Willey, Jr., Virgil George Hobbs, Jr., George Wright and Raymond Simmons, Jr.
In lieu of flowers memorial donations can be made to the Hoopers Island Volunteer Fire Department, c/o Rosemary Dean, P.O. Box 125, Fishing Creek, MD 21634 or Dorchester General Hospital Foundation, c/o Ida Jane Baker, P.O. Box 439, Cambridge, MD 21613.
To share memories and send online condolences to the family, please visit www.newcombcollins.com

To order memorial trees or send flowers to the family in memory of Rufus Todd, please visit our flower store.
Send a Sympathy Card