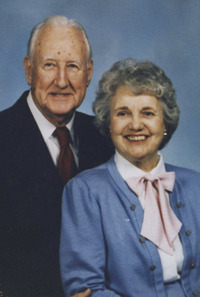 Ruth Johnson Spicer was born on February 7, 1916 in Pittsburgh, PA, the daughter of the late Edward and Mae Johnson. Ruth graduated from Chatham College for Women in 1937 with a Bachelor of Arts degree and then worked in Pittsburgh. She married James Spicer on May 30, 1941. They moved to Silver Spring, Maryland where Ruth completed a teaching degree. She taught third grade for twenty five years and retired from the Montgomery County School System. She passed away on May 19, 2000 in Rowlett, Texas at the age of 84.

James Lingan Spicer was born on February 15, 1915 in Cambridge, Maryland, the son of the late Theophilous and Ada Spicer. As a young man, he resided in Taylors Island. He began his working career in Baltimore, Maryland. He served his country in the U.S. Army during World War II and was honorably discharged with the rank of Captain. His career included terms as Vice President of the American Casualty Co. and President of the Montgomery County Board of Realtors. Jim was a member of the Sons of the American Revolution. He was a long time member of the Optimist International, where he served a term as Governor of the Capital-Virginia District. Jim passed away on November 8, 2006 in Allen, Texas at the age of 91.

While living in Texas, Ruth and Jim were active members of the First Presbyterian Church in McKinney, Texas.

Funeral services and temporary entombments were held in Allen, Texas.

Local arrangements are being handled by Curran-Bromwell Funeral Home, P.A.

To order memorial trees or send flowers to the family in memory of RUTH SPICER, please visit our flower store.
Send a Sympathy Card