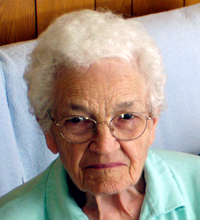 Born on October 18, 1920 in Germantown, Pennsylvania, she was the daughter of the late Caleb Alexander Simmons and Mary Cousins Simmons.

Sara was one of the founders of Gootee’s Marina. Her life was working at Gootee’s Marine, fixing Sunday dinners, going to church, and caring for her family and friends.

Sara was a communicant of St. Mary Star of the Sea, Catholic Church in Golden Hill.

Preceding her in death besides her parents and husband Philip Gootee, is a brother John Simmons and three sisters Mary Hollander, Florence Turner, and Dorothy Belanga and a grandson Chris Gootee.

The family will receive friends at the Curran-Bromwell Funeral Home, P.A. on Wednesday, April 23rd from 7:00 – 9:00 p.m. A Mass of Christian Burial will be held Thursday, April 24th at 2:00 p.m. at St. Mary Star of the Sea, Catholic Church in Golden Hill, MD. Celebrant of the Mass will be The Rev. William J. Lawler. Burial will follow at the St. Mary Star of the Sea church cemetery.

To order memorial trees or send flowers to the family in memory of SARA GOOTEE, please visit our flower store.