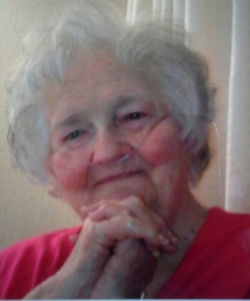 
Sara P. Phillips, 82, of Fishing Creek, Maryland passed away peacefully Wednesday, September 17, 2014 at home with her loving family by her side.
Born December 6, 1931 on Hoopersville, she was a daughter of the late Martha Woodland Parks and George Calvert Parks, Sr.
Sara attended the local schools and graduated from Hoopers Island High School. She was a member of Hoopers Memorial United Methodist Church, Hoopersville.
On February 18, 1949 she married her high school sweetheart A. Albanus Phillips Sr. Together they enjoyed 62 years of happiness before his passing November 1, 2011.
In the early years after her marriage, Sara worked the water with her husband. After their family was started she became a housewife but also built crab pots for the area waterman while the children were napping or in school. Sara was a most loving mother. When she started becoming a grandmother the same gentle loving nature was shown to them and eventually to her great-grandchildren. Her greatest joy was her family and especially her youngest granddaughter, who at age six brought a special connection to her and Albanus before his passing.
Surviving are her children Glen A. Phillips of West Virginia, Martha Ann Willey and her husband Andrew of Crapo, Betty Jane Elliott of Church Creek, Arthur A. Phillips, Jr. and wife Donna of Fishing Creek; sister Ellen Ruark and husband Paul of Hoopersville; sister in law Audrey Adams of Salisbury; eleven grandchildren; fifteen great-grandchildren; several nieces and nephews.
Preceding her in death besides her parents was a son Terry Lee Phillips; brothers George C. Parks, Jr., Benjamin Parks, Sr.; sisters Rosa P. Lewis and Emma C. Cannon.
A funeral service will be held Monday, September 22, 2014 beginning 12:00 noon at Newcomb and Collins Funeral Home, P.A., Cambridge. The family will receive friends the hour prior to the service. Officiating the service will be Rev. Doug Ridley. Burial will follow at Dorchester Memorial Park, Cambridge.
Serving as pallbearers will be Art Phillips, III, Barry Phillips, David Elliott, Eddie Hall, Andrew Willey, Jr. and Jonathan Willey.
Honorary pallbearers will be Alan Ruark, John Fetcho, Paul Ruark and Jay Newcomb.
In lieu of flowers donations in memory of Sara can be made to Coastal Hospice,PO Box 1733, Salisbury MD 21804-1733 or Hoopers Island Vol. Fire Dept., c/o Rosemary Dean, PO Box 125, Fishing Creek, MD 21634.
To share memories and to send online condolences please visit www.newcombcollins.com

To order memorial trees or send flowers to the family in memory of Sara Phillips, please visit our flower store.