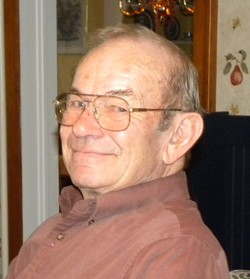 Theodore E. "Ted" Malkus, 89, of Cambridge, Maryland passed away Tuesday, January 19, 2016 at his home.
Born in Cambridge on November 8, 1926 he was a son of the late Nanette Luthy and Milton M. Malkus, Sr.
Ted attended the local schools and graduated from Cambridge High School with the class of 1943.
In 1947 Ted and the former Ann Reid were married and together raised three children.
He later met and married the former Anne Phelps Elzey and her children became a big part of Ted's life.

Ted along with his brothers and their sons carried on the family tradition of farming. Together they owned and operated Blackwater Farms. During Ted’s work years, he loved farming, the hard work, the long hours and the satisfaction received from the harvest after each year’s growing season.

Upon retirement, Ted enjoyed traveling, going camping and spending time with his family and friends. His hobbies included restoring antique tractors, playing cards, going to farm shows and being an avid reader. He also had an active interest in researching his family history and genealogy. A favorite pastime was stopping by Cambridge Tire Center for coffee with Mark and the guys and solving the world’s problems. He also enjoyed attending luncheons with his classmates and attending the local AARP gatherings. Ted loved his family and cherished every moment with them. He will be truly missed by all!

To order memorial trees or send flowers to the family in memory of Theodore Malkus, please visit our flower store.