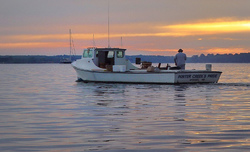 
Thomas H. Branzel, 58, of Cambridge, Maryland passed away Tuesday evening, November 3, 2015 at Mercy Medical Center in Baltimore, Maryland with his family by his side.
“Tom” as he was well known was born on August 7, 1957 in Buffalo, New York. He was a son of Barbara Jane Branzel and the late Robert Hugh Branzel.
Tom, along with his family moved from New York to Ohio where he attended the local schools and graduated from Boardman High School in Youngstown, Ohio with the class of 1975. Tom joined the U.S. Navy and served his country from 1976 to 1980.
After his honorable discharge from the Navy, Tom found his way to Kent Island and lived there several years working in sales for A. I. Root Company as a salesman. For the last 20 years he has lived in Dorchester County. Tom loved the area and would comment on how beautiful the nature was in the area.
When Tom was not out fishing with his buddies or working in his garden, you could find him working out at the Powerhouse Gym. He would entertain his close friends that he had made in the years as a member and they would jokingly say they could set their clocks by his arrival. He would bring in fresh vegetables and fruit and would tell his friends to stop by his truck on their way out and help themselves. Tom truly had a big heart and will be missed by his family and many friends.
Surviving him besides his mother Barbara of Mason, OH is a brother Bill Branzel and wife Lisa of Galena, OH; sister, Patti Alexander and husband Thomas of Goshen, OH; niece Kay Alexander and nephews Matt & Jay Branzel.
Services will be private.
Arrangements entrusted to Newcomb and Collins Funeral Home, P.A., 308 High Street, Cambridge, Maryland.
To send online condolences to the family, please visit www.newcombcollins.com

Services will be private

To order memorial trees or send flowers to the family in memory of Thomas Branzel, please visit our flower store.
Send a Sympathy Card