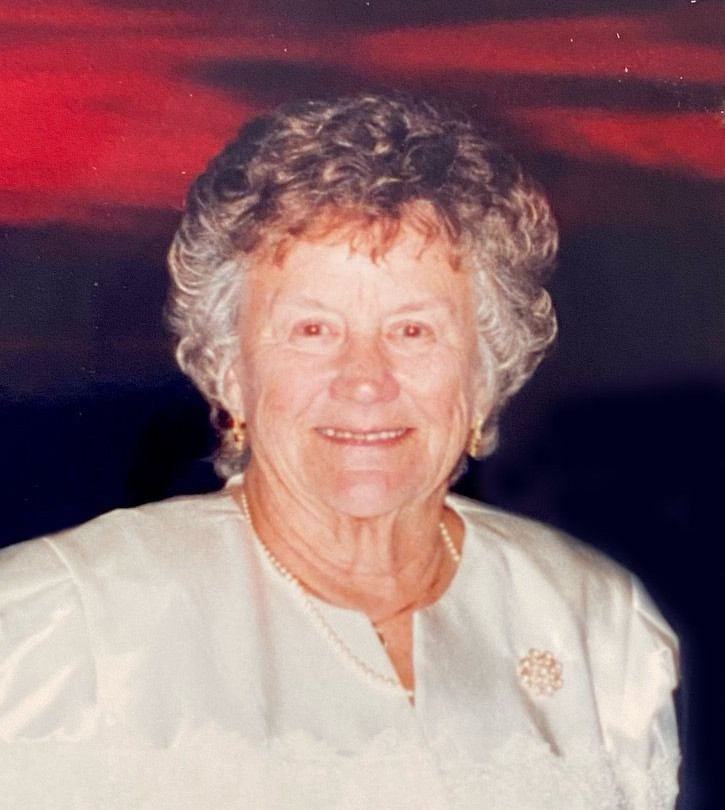 Vivian Elizabeth Applegarth Streep (Betty) age 100, died peacefully on Thursday, January 13, 2022 of natural causes. She was a resident of Brant Beach on Long Beach Island, New Jersey.
Betty was born on March 21, 1921, in Cambridge Maryland, the first child of Samuel Hubert Applegarth and Elizabeth Spedden Applegarth. She grew up on Hoopers Island where the family had a home, and her father owned a very successful crab factory and General Store. She spent her early childhood years on the island working in her father’s store, playing pool with customers, pumping gas at 8 gallons for a dollar, and selling cigarettes (two packs for a quarter). After skipping second grade she said she learned more in that store than she ever would in school. When the Hurricane of 1933 destroyed the family’s crab factory, Betty moved in with her maternal grandparents in Cambridge where she lived and attended High School until graduating in 1937.
Betty began college at age 16, attending the University of Maryland, and receiving her Bachelor of Science in Education. After graduation she taught school and married her college sweetheart, Samuel C. Streep, on November 29, 1941. They returned from their honeymoon on December 7, 1941, the day the Japanese bombed Pearl Harbor and the United States entered World War II. During the next four years, with her husband receiving various orders both domestically and overseas, Betty began raising a family, moving up and down the east coast and finally settling down with Sam outside Baltimore after the war. The family eventually grew to eight children and moved to New Jersey in 1959.
Once settled in the growing community of Cherry Hill, New Jersey, and with her youngest child beginning elementary school, Betty went back to her first love, teaching. She was hired as a full time Earth Science teacher at Cherry Hill High School East in 1970 and spent the next 20 years teaching high school students about our planet. She truly enjoyed her career and often spoke fondly of her former students, her most famous being professional baseball player and World Series MVP, Orel Hershiser. Orel, the good student he was, remembered to call Betty on her 100th birthday last March. Betty loved teaching so much that she took on the additional tasks of tutoring her students at home and teaching Driver’s Education. She retired from teaching in 1990.
Summers throughout her marriage were all spent on Long Beach Island, originally at a family cottage in Harvey Cedars and then later in a home in Brant Beach. The family was a long-time member of the Barnegat Light Yacht Club until the loss of their summer home in the March 1962 storm. In 1963 the family moved their summer residence to Brant Beach and joined the Brant Beach Yacht Club (BBYC) where Betty spent the last 58 summers. She served more than 30 years on the Club Race Committee, was the Club’s Social Chairlady in 1966, and never tired of volunteering at BBYC events, both sailing and social. Winters were spent in Marco Island, Florida where Sam and Betty were quite active and enjoyed many new friendships, and vacations were most often spent traveling to Europe, Australia and New Zealand as well as visiting family in the States. And no matter where Betty was, she always sought out a good game of Bridge.
Betty was married 71 years to Sam and is survived by seven of her eight children. Four daughters, Sara Becker (Roger), Vivian Perrino, Mary Buczynski (Frank), Elizabeth German (Jeffrey), three sons, Samuel C. Streep Jr. (Marina), William C. Streep (Janet), and Hubert A. Streep (Lori), twenty grandchildren, sixteen great-grandchildren and one great-great grandchild. She was pre-deceased by her husband, Samuel, a brother, S. Hubert Applegarth, Jr., her granddaughter, Suzanna Becker, her son, John S. Streep (Kathie), and son-in-law Edward Perrino.
Mass of Christian Burial and interment at St. Mary Star of the Sea, Golden Hill will be private for family only. A Celebration of Life at the Brant Beach Yacht Club will be held in the spring of 2022 - time and date still to be decided. In lieu of flowers, donations may be made to the St. Mary Star of the Sea Golden Hill Foundation, Inc. – PO Box 187, Fishing Creek, MD 21634; or Hackensack Meridian Health Foundation (Hospice) – 343 Thornall Street, Edison, NJ 08837; or the Brant Beach Sailing Foundation – P.O. Box 402, Ship Bottom, NJ 08008
Arrangements entrusted to Newcomb and Collins Funeral Home, P.A., Cambridge Maryland