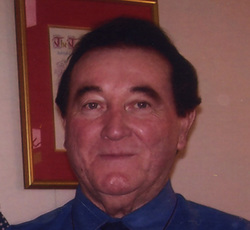 
Wallace “Wally” L. Simmons, 75, of Cambridge passed away Saturday, July 4, 2015 at Mallard Bay Care Center.
Born October 20, 1939 on Hoopers Island, he was a son of the late Olive Wallace Simmons and Leroy Stewart Simmons.
After graduating from the local schools, Wally enlisted to serve his country in the US Army. He served honorably for six years and was stationed at the Berlin Command, Berlin, Germany.
Upon completion of his military duty Wally returned to Hoopers Island. He began a career with the City of Cambridge in 1964 as Housing Inspector. Wally worked for the City for over thirty years. After retiring from the City in 1994 Wally became an insurance agent with the Prudential Insurance Company.
For many years Wally was a member of Hoiser Memorial Methodist Church. Later he joined the Brookview-Eldorado Church. He was always very dedicated to his church and played the organ and piano for its services. Wally also was a member of a small band and often played at community events and weddings. Wally was always known as a caring and kind person.
Surviving is his sister in law Marie Simmons; nieces Denise Morton, Kelly Perez, Wendy Adkins, Kim Bradshaw; along with several great nieces and nephews.
Preceding him in death besides his parents is a brother M. Wayne Simmons and a great nephew Andy Perez.
A memorial service with military honors will be held Friday, July 10, 2015 beginning 12:00 noon at Maryland Eastern Shore Veterans Cemetery, Hurlock. Officiating will be Rev. A. Delmer Willey, Jr.
Memorial donations in memory of Wally can be made to Newcomb and Collins Funeral Home, P.A., 308 High Street, Cambridge, MD 21613 to help defray funeral cost.
To share memories and send online condolences please visit www.newcombcollins.com

To order memorial trees or send flowers to the family in memory of Wallace Simmons, please visit our flower store.
Send a Sympathy Card