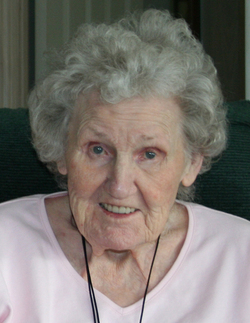 Wanda D. Lukes, age 84 of East New Market, MD, left this earthly world for her eternal home on Wednesday, March 16, 2011 at Dorchester General Hospital. She had recently been a resident of Chesapeake Woods, Cambridge.

Born on May 14, 1926 in Grindstone, Pennsylvania, she was the daughter of the late Earl Monroe Dennis and Martha Cutright Dennis.

Mrs. Lukes retired as Assistant Treasurer of the District of Columbia government and moved to Cambridge where she worked numerous jobs including Airpax, Trans Data and H & R Block. She had been active in the Democratic Club, the Cambridge Quota Club, American Legion Auxiliary, and VFW Auxiliary.

Wanda had a passion for baseball especially for the Baltimore Orioles. She also was a Washington Redskins fan. Although not a native of the Eastern Shore she loved Cambridge and refused to move “across the bridge”, as she so called it. As a “people” person, she made friends easily. Her move to the East New Market area about ten and a half years ago resulted in a new love for Trinity United Methodist Church and the fellowship there. She felt very blessed.

Preceding her in death besides her parents was a brother Earl M. Dennis, Jr. and her former husband Harold E. Lukes, Sr.

Funeral services will be held at Noon on Saturday, March 19th at Trinity United Methodist Church, 6 Cambridge Ave., East New Market, MD where the family will receive friends one hour prior to the service. Officiating will be The Rev. Delmer Willey, Pastor. Burial will follow at Greenlawn Cemetery.

In lieu of flowers, memorial offerings may be made in Wanda’s memory to Trinity United Methodist Church, PO Box 95, East New Market, MD 21631.

To order memorial trees or send flowers to the family in memory of Wanda Lukes, please visit our flower store.