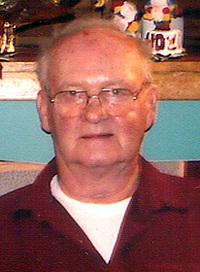 Born on June 6, 1938 in Scaggsville, MD, he was the son of the late Amos Edward Souder II and Mildred Leona Poe Souder. Mr. Souder was a direct descendent of the famous poet and author Edgar Allan Poe.

Mr. Souder was educated in Bladensburg, MD and received his GED through the United States Marine Corp. Mr. Souder was a U.S. Marine veteran having served from January 29, 1956 to January 28, 1959. He received and Honorable Discharge from the Marines in 1959.

Mr. Souder worked for Sunshine Biscuit and owned and operated his own printing business before working and retiring from Exxon in 1991.

On September 15, 1960 he married the former Charlotte C. Shifflet.

Mr. Souder was a member of the Cambridge Moose Lodge and the National Rifle Association. He was an avid outdoorsman and liked to hunt and fish. Mr. Souder was also a creative craftsman.

Preceding him in death besides his parents was a son Timothy Lee Souder; a brother Larry Souder; and step-father Lawrence Arnold.


A Celebration of Life Service with Military Honors will be held at Curran-Bromwell Funeral Home, P.A. at 1:00 p.m. on Wednesday, November 5th, where the family will receive friends two hour prior to the service. The decedent’s cousin, Mr. David Holder, will lead the service. Inurnment will be held privately at a later date at The Maryland Veterans Cemetery.


To order memorial trees or send flowers to the family in memory of WAYNE SOUDER, please visit our flower store.