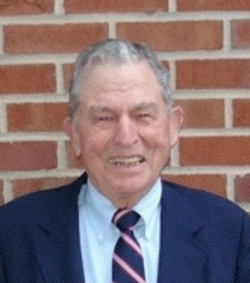 William W. Deissler, Jr., 91, of Cambridge passed away peacefully Friday, October 18, 2013 at Chesapeake Woods Care Center, Cambridge, Maryland.
Born March 2, 1922 in Wyndmoor Pennsylvania he was the son of the late Ethel Marjoran and William W. Deissler, Sr. He grew up in Pennsylvania and after high school attended first St. Lawrence University in New Hampshire and then Muhlenburg College in Pennsylvania from where he graduated.
During World War II Bill enlisted in the US Navy. After receiving training at Northwestern University he became a Navigator with rank of Lieutenant. He served aboard the USS Towner in the Pacific Theatre. Upon being discharged in 1945 he served in the Naval Reserves.
Bill moved to the Cambridge area in 1961 with the opening of Connelly Containers. For most of his life he was self employed as a Manufacturing Representative. On December 12, 1972 he married the former Betty Stoker Williamson. They enjoyed almost 41 years of marriage.
His warm smile, great sense of humor and unique laugh were some of his traits but most of all he was a true gentleman. He took pride in his appearance and his love for his wife was always apparent.
He was a member of the Cambridge Yacht Club, Cambridge Lodge 66 and Zion United Methodist Church.
Surviving besides his wife Betty is a sister Grace King of Honolulu, Hawaii; two nieces and a nephew.
Preceding him in death besides his parents is a sister Lillian Aldrich.
A funeral service will be held on Sunday, October 20, 2013 beginning 4 p.m. at the Newcomb and Collins Funeral Home, P.A., Cambridge. The family will receive friends the hour prior to the service. Officiating will be Rev. Dr. Robert Kirkley.
Interment will be private at Dorchester Memorial Park, Cambridge on Monday, October 21, 2013.
In lieu of flowers memorial donations in memory of Bill should be made to Zion United Methodist Church Endowment Fund, 612 Locust Street, Cambridge, MD 21613.
To send online condolences to the family please visit www.newcombcollins.com

To order memorial trees or send flowers to the family in memory of William Deissler, Jr, please visit our flower store.