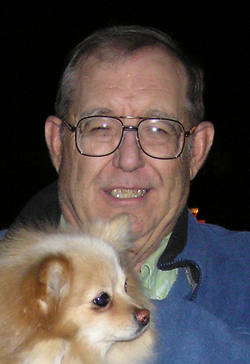 Born in Cambridge, Dorchester County, MD on February 26, 1939, he is the son of the late Frederick Edward Eberspacher and Katherine Metz Eberspacher.

Mr. Eberspacher made the family farm, The Brick House Farm in Drawbridge his home throughout his entire life. He was a graduate of North Dorchester High School, Class of 1957 and had attended the University of Maryland, College Park for two years.

On November 10, 1962 he married the former Ann Spicer of Cambridge, MD.

Mr. Eberspacher was a farmer and since the 1970’s he worked during the winter delivering oil in Cambridge for Leon Hurley, Granville Hooper, and lastly for Pep-Up. He retired in 2000 due to his health beginning to fail as a result of severe depression. Two years ago he developed dementia and was a resident at Mallard Bay Care Center for the past five months.

Mr. Eberspacher’s early Christian education and Confirmation were at Immanuel Evangelical & Reform Church which later became the Immanuel United Church of Christ. He later attended Grace Baptist Church, Hurlock, MD for 17 years and had been a member of the Lighthouse Baptist Church, Cambridge, MD for about 10 years.

His hobbies were reading particularly topics of history and was an avid NASCAR fan since his teenage years.

Funeral services will be held at 1:00 p.m. on Wednesday, March 10th at Curran-Bromwell Funeral Home, P.A., where the family will receive friends one hour prior to the service. Officiating at the service will be Pastor Dave Stewart. Burial will follow at Dorchester Memorial Park.

To order memorial trees or send flowers to the family in memory of William Eberspacher, please visit our flower store.