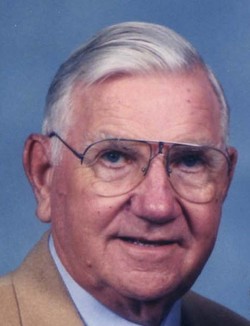 
William E. “Bill” Gore, Sr., 89, of Cambridge, MD, passed away peacefully with his loving family by his side on February 5, 2017 at Charlotte Hall Veterans Center, MD.

Born in Baltimore, Maryland on September 8, 1927 he was the son of the late Noah Zebedee Gore and Margie Creighton Gore.

In April, 1948, he married the former Annelore Wilhelmine Kirsch whom he met while stationed in Germany. Bill and Ann enjoyed 62 wonderful, happy years of marriage before Ann’s passing October 25, 2010.

Upon his return to civilian life, Bill was a supervisor for twenty-three years at Airpax Electronics from where he retired in 1989.

Both Bill and Ann were active members of St. Paul’s United Methodist Church since 1966. He was also a member of the Methodist Men of St. Paul’s and was chairperson at the annual Flower Fairs for many years. Always involved in all the church functions, he helped to make the biscuits for the soup days and fry the oysters for their famous oyster sandwiches.

Bill was also a member of the VFW Post 7460, American Legion Post 91, Cambridge Elks Lodge 1272, Honorary Member of Rescue Fire Company for over 20 years and the Air Force Sergeants Association.

In his spare time Bill loved playing golf, bowling and fishing. His family will always cherish the times spent as they learned the games from their loving father/grandfather.

Preceding him in death besides his parents and wife Ann was his brother Lloyd George Gore; sister Sarah Cross Wood and a nephew William Cross.

Funeral services will be held Friday, February 10, 2017 beginning 1:00 pm at St. Paul’s United Methodist Church, Cambridge, MD. The family will receive friends one hour prior to the service. Officiating at the service will be Pastor Bonnie Shively and Rev. Dale Brown. Burial will follow at Greenlawn Cemetery, Cambridge, MD with Military Honors.

Serving as pallbearers will be Bill’s grandchildren.

In lieu of flowers, memorial offerings may be made in Bill’s memory to St. Paul’s United Methodist Church, 205 Maryland Avenue, Cambridge, MD 21613.

To send letters of condolences to the family, please visit www.newcombcollins.com

To order memorial trees or send flowers to the family in memory of William Gore, Sr, please visit our flower store.
Send a Sympathy Card