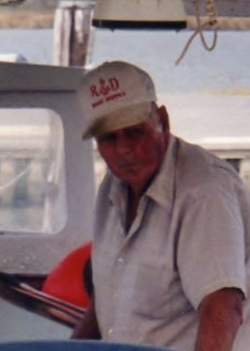 William Huether, 87, of Cambridge, Maryland passed away peacefully Saturday, April 8, 2017 at home with his family by his side.
Born in New York on July 25, 1929, he was the son of the late Myrtle Shannon and Joseph P. Huether.
He attended the local schools in New York and after graduation he served in the National Guard for a few years.
Recently celebrating their 66th wedding anniversary, William married Mae Claire Benson on February 3, 1951 and together raised six children.
William had a love for the Chesapeake Bay and worked as a waterman with his family. He decided to retire at the age of 80 yrs old after many memories were made on the bay.
In his younger years he worked at a Navy Shipyard building personnel boats out of Freeport, NY. He then built boats on the side while working the waters. William enjoyed traveling, camping , watching NASCAR racing and playing pool.
William is survived by his wife Mae Claire and children Jean DeMatteo of Seaford, DE, Robert Huether and wife Christine of Selden, NY, Richard Huether and Susan Huether of Cambridge and Mary Ann Cowan and husband Michael of Hartly, DE; grandchildren Jennifer Huether of North Carolina, Billy and Bobby Huether of New York.
Preceding him in death besides his parents is a son William Frank "Bill" Huether who died January 17, 2017.
Memorial contributions in memory of William can be made to Coastal Hospice Foundation, P.O. Box 1733, Salisbury, MD 21802.
Services will be private.
Arrangements entrusted to Newcomb and Collins Funeral Home, P.A., Cambridge.
To share online condolences with the family, please visit www.newcombcollins.com

Services will be private

To order memorial trees or send flowers to the family in memory of William Huether, please visit our flower store.