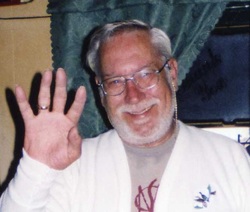 William L. "Bill" Massey, 69, of Hurlock, passed away Tuesday, December 11, 2012 at Peninsula Regional Medical Center, Salisbury.
Born in Salisbury on November 6, 1943, he was the son of the late Edmond and Maude Jaynes Massey.
Bill attended local schools and graduated with the North Dorchester High School class of 1961. After graduation he attended Goldey-Beacom College in Wilmington, DE.
He worked for the Colonial Grocery Store in Cambridge until they closed and then worked at Meatland for many years before retiring as store manager. After retiring he managed F-Town Tavern in Federalsburg until 2010. Bill was an avid reader and loved to travel. He took many trips with his close friend Mike Calloway and enjoyed visiting close friends in Florida several times a year until his health deteriorated.
Surviving him are 2 daughters, Deborah Harding and her companion Jeff Moran of Hurlock, Donna Faulkner and her husband Otis of Cambridge; 4 grandchildren, Ronald Harding Jr., William Lee Harding and his wife Amber, Aimee Johnson Wilkens and her husband Bryan and James Johnson; 2 great grandchildren, Nicole Harding and Gabriel Harding; 2 sisters, Barbara Horsman of Seaford, DE, Susan Cross-Russell and her husband Ken of Lynchfield, Maine; 2 nephews, John Horsman and his wife Cindy, Frank Horsman and his wife Linda and many cousins; special friends Mike and Mary Calloway, Margaret Elms and Ron Harding Sr.
Preceding him in death besides his parents is his step-father Marion Lewis Cross and brother-in-law Frank Horsman.
A funeral service will be held on Saturday, December 15, 2012 beginning 2 p.m. at Newcomb and Collins Funeral Home, P.A., Cambridge. Officiating at the service will be John Moore. Family will receive friends two hours prior to the service. Burial will be private at a later date.
In lieu of flowers, memorial contributions in memory of Bill can be made to the American Legion Post #91, P.O. Box 70, Cambridge, MD 21613 in honor of his father who was killed in WWII.
To send online condolences, please visit www.newcombcollins.com.


To order memorial trees or send flowers to the family in memory of William Massey, please visit our flower store.
Send a Sympathy Card