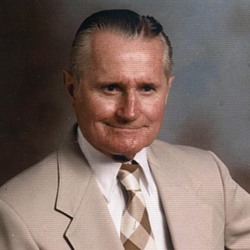 
DUE TO INCLEMENT WEATHER, THE MEMORIAL SERVICE HAS BEEN POSTPONED. IT HAS BEEN RESCHEDULED FOR WEDNESDAY MARCH 5, 2014 AT 1 P.M.


William M. Parrott, 86, of Cambridge, MD passed away Sunday, February 23, 2014 at Chesapeake Woods Center, Cambridge.
Born June 2, 1927 in Chester, PA, he was the son of the late Nettie V. Butler and Capt. William Perrott.
After his secondary education, he served his country during the end of World War II. Following his military duty and for most of his life, William had been a truck driver. After his retirement, he enjoyed automobile shows. He would often be seen at the local events in his classic Cadillac convertible. A very generous and loving man, William enjoyed doing for people and asking nothing in return.
Surviving are two grandsons, Don Allen Parrott, Jr. and Robert William Parrott; two special friends Arlene Hanson and Debby McGrath.
Besides his parents, he is preceded in death by his former wife and a son Don Allen Parrott, Sr.
A memorial service will be held Wednesday, March 5, 2014 beginning 1 p.m. at Newcomb and Collins Funeral Home, P.A., Cambridge.
To share memories with friends and to send online condolences please visit www.newcombcollins.com

To order memorial trees or send flowers to the family in memory of William Parrott, please visit our flower store.