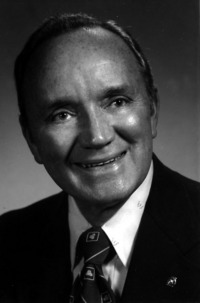 Born in Pocomoke City, Maryland on July 20, 1917, he was the son of the late Roger Franklin Vincent and Leta Bonneville Vincent.

After completing his secondary education in Pocomoke City, he entered Western Maryland College. Graduating in 1942, he was immediately ordered to active duty during World War II. As a Second Lieutenant, Mr. Vincent served sixteen months in Europe as a liason officer in France, Germany, and Czechoslovakia, earning a Bronze Star and four battle ribbons. At the conclusion of the war he continued his military service in the US Army Reserves, retiring with the rank of Major in 1977.

In 1948, Mr. Vincent married the former Dorothy Jean Wilson of Logan, West Virginia. Residing in Cambridge, his first employment was head clinical laboratory technician at the Eastern Shore State Hospital and at what is now Dorchester General Hospital. In 1960 be began a new career as an agent for State Farm Insurance, retiring in 1983. During that time, through his efforts, The Chesapeake Association of Life Underwriters was organized with him as charter president.

Preceding him in death besides his parents were three brothers and two sisters.

Funeral services will be held at 11:00 a.m. on Tuesday, January 6th at Grace United Methodist Church, 501 Race St., Cambridge, MD, where the family will receive friends one hour prior to the service. Officiating at the service will be The Rev. Jay Hurley, Pastor. Interment will follow at Old Trinity Church Cemetery, Church Creek, MD with Military Honors.

To order memorial trees or send flowers to the family in memory of WILLIAM VINCENT, please visit our flower store.
Send a Sympathy Card