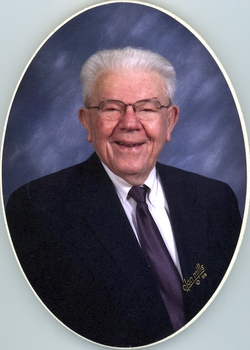 Wilmer Donaldson "Don" Fluharty, 83, of Easton, Maryland passed away on Wednesday, March 27, 2013 at the William Hill Manor in Easton.
Don was born August 15, 1929 to the late Edward and Viola Fluharty. At a young age the family moved to Tilghman. He attended local schools and graduated from St. Michaels High School with the Class of 1946. Afterwards he attended Goldey College.
As a young man Don began his working career at the Tilghman Packing Company in the business department. After 40 years of service the plant closed at which time he retired as Vice President. Soon afterwards he began his second career at ConAgra Foods where he was involved in the inspections to ensure quality assurance.
On November 7, 1958 Don married the former Norma Roberson of Church Creek. Together they loved ballroom dancing and roller skating. Don enjoyed photography and both were animal lovers. Wood working was a hobby that also brought great joy. They were happily married for 51 years until Norma's passing in 2009.
Don was an active member of the Elks and the St. Marks United Methodist Church.
Surviving are a nephew Jim Daffin and wife Diane of Easton; niece Karen Sears and husband Ray of Annapolis and sister in law Rosalee Dolan and husband Tom of East New Market.
In addition to his parents and wife, he was preceded in death by a half sister Irene Daffin.
A Celebration of Life Service will be held Wednesday, April 3, 2013 beginning 11 a.m. at the St. Mark's United Methodist Church, Easton. Officiating will be the Rev. Gilbert Anderson. Private inurnment will be held at Woodlawn Memorial Park, Easton.
Expressions of sympathy may be made by making memorial offerings in Don's memory to St. Mark's United Methodist Church, 100 Peachblossom Road, Easton, Md. 21601.
Arrangements are entrusted to the Newcomb and Collins Funeral Home, P.A., Cambridge.

To order memorial trees or send flowers to the family in memory of Wilmer Fluharty, please visit our flower store.
Send a Sympathy Card